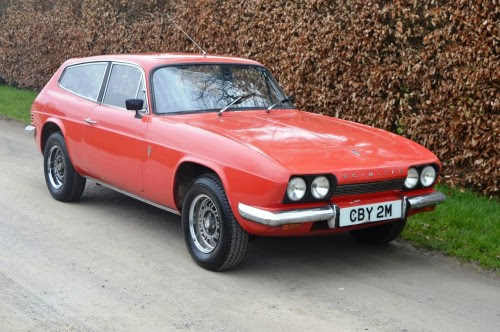 1973 RELIANT SCIMITAR SE5a
Popularised by Princess Anne in the 1970s (she owned at least eight, all with the registration number 1420 H), the Reliant Scimitar remains one of the most practical classics that money can buy. Clothed in a handsome glassfibre body and powered by the trusty Ford 3.0 V6 engine and box, this sporting estate offers a huge amount of style and versatility for very little money.
Launched as the SE5 in 1968, the car was replaced by the SE5A in September 1972 which had a revised interior fascia, slightly more powerful engine and a more modern gearbox. In 1976 this was in turn replaced by the wider and heavier SE6 which continued in production until 1982.
This 1973 SE5a Automatic was sold new by Romford Market Garage, specified in Everest White and first registered 947 ANN. The service book has five stamps, the last of which was in October 1981 at 22,500 miles. A file of bills and invoices cover expenditure over the years, the most recent outlay accounting for a new radiator and hoses, a new battery, new brake pipes, master cylinder and servo, new rear shoes and cylinders, front caliper overhaul, a stainless steel exhaust system, new fuel tank and replacement coil-overs.
All this recent expenditure has transformed the car, which according to the vendor performs well, its MOT expiring in March 2016. The interior is in good condition for its age, the main area which detracts from the car being its poor paint finish, the thick red paint having been rather badly applied and needing rectification.
Its fresh Ogle styling, straightforward mechanics and rot-free fibreglass bodywork have always made the Scimitar GTE a tempting proposition. This cosmetically challenged example looks like exceptional value when the recent expenditure is taken into account, requiring little more than a straightforward respray to transform back into the smart, usable example it deserves to be.

Posted by jeffharris at 19:34 No comments: 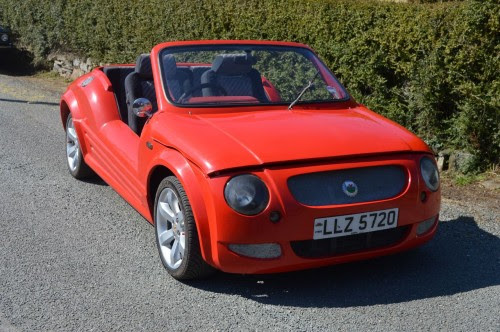 Posted by jeffharris at 08:17 No comments: 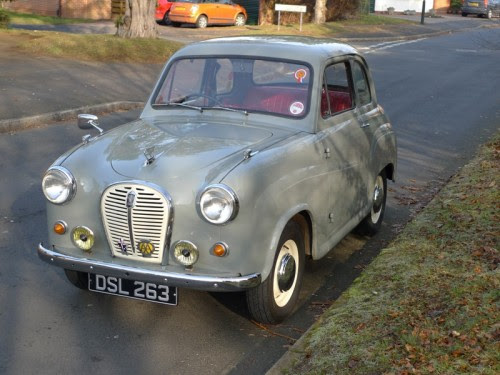 
Following the success of the pre-war Seven, Austin placed enormous importance on their new post-war small car range.
Indeed Lord Austin took the task so seriously that he employed Raymond Loewy's legendary USA design agency for advice and one of their top men, Bob Koto, was despatched to England for four months to help style the new baby Austin.
Prior to his arrival, Lord Austin had also purchased an interesting one-off design built by Ian Duncan. He ran a small business making bodies for Healey and Alvis cars, and had come up with a monocoque front-wheel drive design. Along with his prototype, he was contracted to the engineering department at Longbridge and started work on the chassis design. The outcome of their labours was the Austin A30, a small car with four seats which proved an instant success in the car-starved post-war marketplace.
"In a car which goes along so willingly, handling qualities are of considerable importance," wrote Bill Boddy in Motor Sport. "Steering the A30 on a wet road in a strong crosswind, or at its terminal velocity downhill, is rather like walking a tightrope - alright if you keep going straight."

Naturally Austin ignored his comments and in 1956 launched an even more willing A35, an updated version of the A30 with a larger rear window, painted grille and indicators in place of the old semaphores. Under the bonnet the 803cc engine was replaced by the 948cc A-Series mated to a new gearbox with remote change. It was enough to continue the strong sales until the arrival of the all new A40 in 1959. Autocar tests showed a top speed of 72mph, with 0-60mph taking 30 seconds. Fuel consumption was a modest 41.5 mpg. Then as now, the A35 was adored by racers who found the engine endlessly tunable, the monocoque body exceptionally stiff and the handling second to none - Bill Boddy notwithstanding!

First registered in July 1957, this very smart example was purchased through Brightwells in early 2011 and has proved very reliable. Shortly before the vendor acquired the car it had been re-upholstered including new door cards. The maroon carpets were new and the seatbelts had been replaced. The engine runs very sweetly with a recent new carburettor and the car is fitted with a stainless steel exhaust. The vendor has also added an electronic ignition system and a recent new brake cylinder. Although exempt from such things, it carries a current MOT which expires in March 2016.

The demand for A35s has seen a dramatic turnaround recently. Maybe the exposure in the Wallace and Grommit films, or their recent successes on the historic race circuit are responsible. Whatever the reason, they make a highly practical, reliable and economical classic which is great fun to drive. 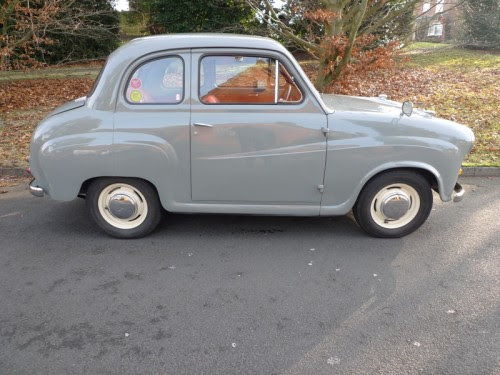 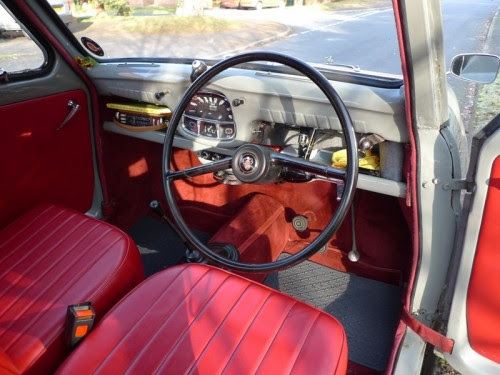 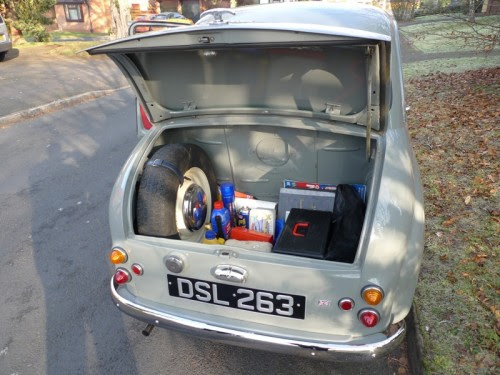 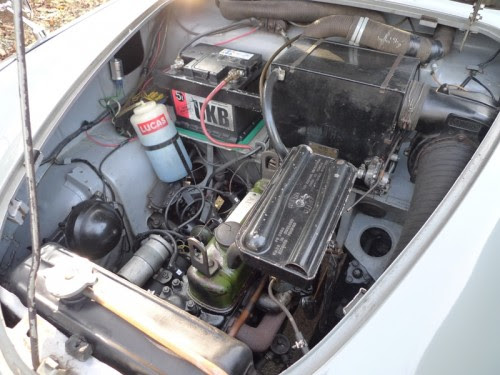 Posted by jeffharris at 10:44 No comments: 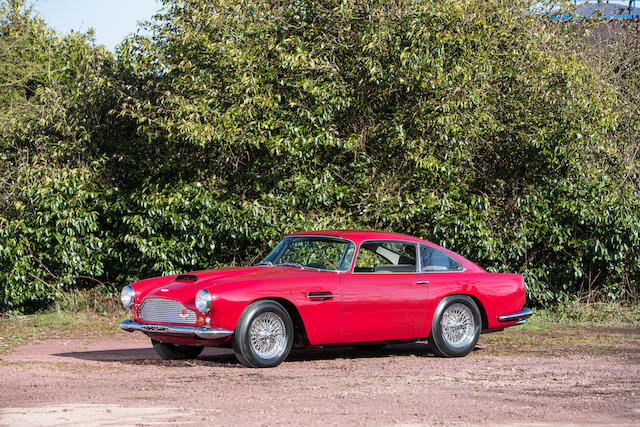 At its launch in October 1958, the DB4 marked a major turning point for Aston Martin as it was the first car of the David Brown era which neither used a chassis derived from the experimental Atom of 1939 nor an engine designed by W O Bentley. Moreover, it was the first Aston Martin to carry Carrozzeria Touring's 'Superleggera' bodywork, in which light alloy panels were fixed to a framework of light-gauge steel tubes welded to a platform chassis. Although styled by Touring, the DB4's gorgeous fastback coachwork was built under license at Newport Pagnell by Aston Martin, which employed some of the finest panel beaters in the industry. The result was a car whose sleek lines were described as 'unmistakably Italian and yet... equally unmistakably Aston Martin'. When the DB4 was introduced, it was Britain's most powerful and fastest production car, and its aerodynamically styled, all-aluminium, Superleggera coachwork looked sensational, establishing a look that would endure for the next dozen years.

The Aston Martin DB4 was the first of the DB models to employ the entirely new twin-overhead-camshaft, six-cylinder, 3.7-litre engine designed by Tadek Marek, which had first been seen at Le Mans the previous year in the DBR2. A Polish engineer who had joined the company in 1954, Marek had previously enjoyed a racing career and posts with General Motors and FIAT in Poland, the design of tanks during WW2, and had arrived at Newport Pagnell from Austin.

Manufactured between October 1958 and June 1963, the DB4 developed through no fewer than five series. However, it should be made clear that the cars were not thus designated by the factory, this nomenclature having been suggested subsequently by the Aston Martin Owners Club to aid identification as the model evolved. The first series had already undergone a number of improvements, including the fitting of heavy-duty bumpers after the first 50 cars, before the second series arrived in January 1960. A front-hinged bonnet, bigger brake callipers and an enlarged sump were the major changes made on the Series II. Including Vantage and convertible models, approximately 1,100 of these iconic 'Gentleman's Express' sports saloons were produced between 1958 and 1963.

This left-hand drive 'Series I' DB4 was delivered new via Aston Martin's United States West Coast importer Charles Hornburg and first owned by one Paul S Pollack (Karl's Shoes Limited) of Los Angeles, California. The accompanying copy order form records that the car was finished in Snow Shadow Grey with red Connolly leather interior trim and equipped with chromed road wheels. Highly collectible, this rare 'Series I' car is one of approximately 150 built. As such it features particularly clean styling, closest to Touring's original conception for the model.

The AMOC Register (published 2000) shows that '245/L' formerly belonged to one R J Minella in the USA and that during the early mid-1990s it was entered in various concours events by 'Rodd', presumably a previous owner. The car's record is most impressive, consisting of mainly 1st-in-class awards and wins in the Charles Turner Trophy competition (on two occasions).

'245/L' is finished in Peony Red with Mushroom leather interior trim complemented by clean brightwork and chromed wire wheels shod with period-correct Avon cross-ply tyres. The engine bay is very tidy and it is obvious that the chassis has been restored, retaining the correct lever-arm dampers. The DB4 appears to be a strong runner, starting readily and showing decent oil pressure; however, we are advised that the gearbox is somewhat balky and would benefit from expert attention. Eligible for AMOC and a wide variety of other historic events, the car is offered with the aforementioned copy order form.

Should the vehicle remain in the UK, local import taxes of 5% will be applied to the hammer price. 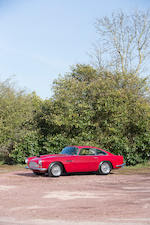 Posted by jeffharris at 06:47 No comments: 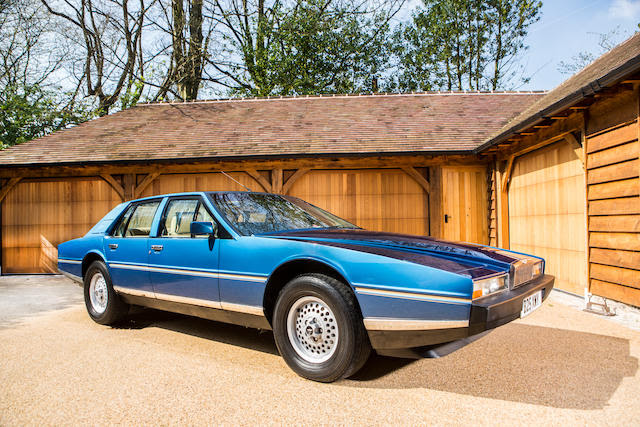 Posted by jeffharris at 09:56 No comments: