UNDER THE HAMMER
From

Viewing: Wednesday 2 March 2pm - 7pm / Sale Day from 9am
Sale begins at midday. Vehicles to be sold at approximately 2pm. 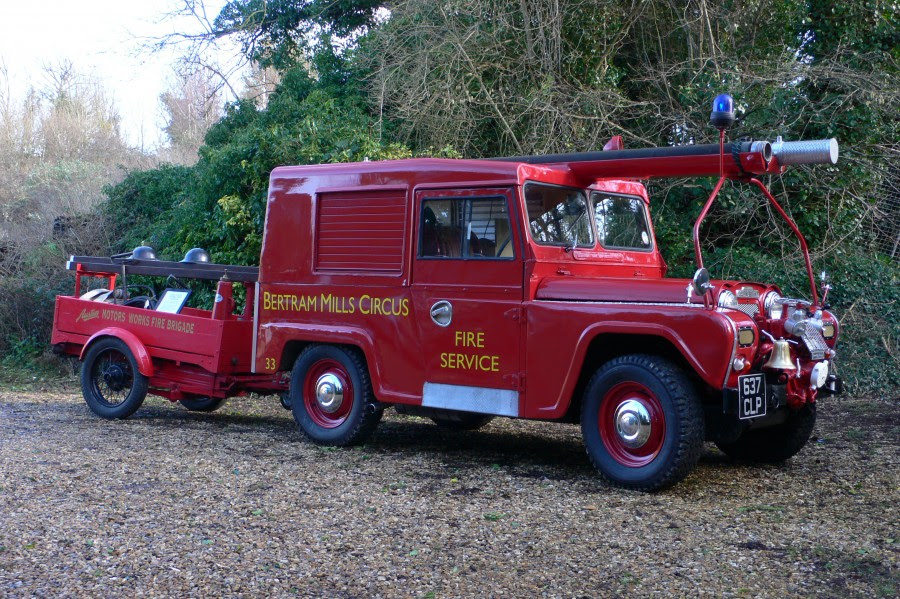 
The Gipsy was the civilian successor to the Austin Champ, and was intended to be a direct rival to the Land Rover. Despite resembling its competitor, the Gipsy was technically significantly different. It was the first vehicle to implement an all-independent suspension using ‘Flexitor’ rubber torsion units, which produced improved traction and offered the Gipsy’s occupants more comfort across rugged terrains. The 2199cc engine was inherited from the A70 and had gained itself a good reputation for reliability. The rugged steel body and chassis meant that many examples succumbed to rust and rot; of the vehicles that remain today, it is quite possible that those supplied for use as fire service vehicles are the survivors that have stood the test of time most successfully.
This example is not your usual Home Office Gipsy, but a unique fully equipped fire engine that was first registered to the famous Bertram Mills Circus. Added to that is a gem in the transport world: a fire trailer based on an Austin 7 chassis and built by the apprentices at the Longbridge factory.
We understand that the restored fire trailer, which is equipped with the necessary gear to fight fires, was towed behind a vehicle at the Austin Motor Company prior to the Second World War. The current custodian, after purchasing the Gipsy, decided that it would be appropriate to fit the trailer to the fire unit.
When in service for the circus, the Austin Gipsy was transported around the country by train, along with the other fleet vehicles, lorries, trailers and caravans. Even the animals were transported by rail. This actual vehicle is featured in the book “Bertram Mills – The Circus that Travelled by Train”.
637 CLP was then sold at auction in 1966 to The Trading Post Ltd of London, a film props hire company. The Austin then passed through two further ownerships before being purchased as an unfinished project in 2007. A comprehensive photographic restoration followed, not only of the vehicle itself, but also of the fire fighting equipment and the Coventry Climax pump. Lastly, a correct type engine was installed which has only covered a small mileage since. Please note that both the spare wheel and front power-take-off shaft have been removed but are supplied.
A sizable history is supplied with this historic commercial, which includes the V5C registration certificate, the RF60 registration book, correspondence, a rare sales brochure, images and restoration photographs.
A rare opportunity to acquire a vehicle that has links to the history of Austin Works, the Bertram Mills Circus, fire fighting and Austin vehicles.
Auction Date: 3 March 2016

SOURCE: Dorset Vintage & Classic Auctions
Under ths Hammer is brought to you by: CLASSIC CHATTER
www.classicchatter.co.uk