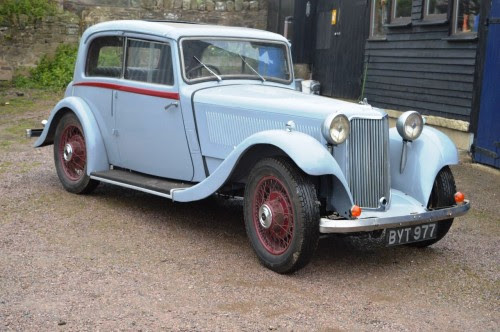 Click Here for Full Screen Image - Click Here to Download Image
One of the great Coventry marques, Armstrong Siddeley Motors was formed in 1919 by a merger between Armstrong Whitworth and the Siddeley Deasey Motor Company.

With a strong background in aircraft development which fed into the design of their cars, the company quickly gained a reputation for fine engineering, craftsmanship and meticulous attention to detail – ‘The Car of Aircraft Quality’ as the advertising slogan had it.

The range had developed into a a wide spread of models by the 1930s, from the small 12hp to the fabulous 5-litre Siddeley Special. During the Second World War the Parkside factory produced tank engines, torpedoes, airframes and engines for Lancaster bombers – attracting considerable attention from the Luftwaffe!

Quickly finding their feet once war was over, Armstrong Siddeley was among the first British manufacturers to produce a new range of cars, the 16hp, Lancaster, Whitley, Hurricane and Typhoon being wholly new and modern designs followed by the Sapphire and Star Sapphire in 1958. Car production ceased in 1960 in favour of increased production of aircraft engines and these facilities are now part of the Rolls-Royce organisation.

Their most sporting model was the 17hp Sports Foursome short chassis which was launched in 1934 and produced until 1938. It had a six-cylinder in-line monobloc engine displacing 2,396cc with a four bearing crankshaft, balanced alloy pistons, overhead valves and a downdraught Claudel-Hobson carburettor.

Transmission was via a four-speed preselector gearbox with a Salisbury rear axle and semi-elliptic springs all round, underslung at rear. Steering was by worm and nut, with Enot’s ‘one shot’ central lubrication system and a permanently installed jacking system. The extremely attractive bodywork was by Burlington of Coventry and featured a four-seat, two-door pillarless coupe with ingenious front side windows that both slid back and forth and wound up and down.

Registered new in 1935 to Lady Grace Dance, widow of the late Sir George Dance, theatre impresario and great friend of King George VI, she remained loyal to the Armstrong Siddeley marque long after his death, this being their third or fourth new example. The vendor has been told that the Imperial War Museum holds a photograph of her driving the car through the gates at Buckingham Palace and also that footage exists in a British Pathe News clip showing the car, again being driven by Lady Grace, arriving at a concert in London with jazz star Charlie Kunz.

The buff logbook lists her as its first owner, along with a number of new owners as the years went by. The car's history file contains a book of photographs showing details of a protracted bare chassis restoration that took place in what looks like the 1980s.

The vendor acquired the car in 2013 with just a few minor finishing off jobs remaining, the car having had very little use since its comprehensive restoration was all but completed. He fitted a stainless exhaust, renewed much of the wiring and fitted a new battery, petrol pump and fresh tyres, bringing the car back to good health. Sadly he has found it a bit too cramped for his extended frame and so has not been able to enjoy it has he had hoped.

This is a great pity, as the extremely handsome bodywork is in very sound condition, along with the engine and preselector gearbox which also function as they should. The interior is a particularly nice place to be, retaining its original red leather upholstery which is in super, patinated condition with a good headlining, although the car would be further enhanced with a new set of new carpets.

The low-slung chassis, refined yet powerful engine and particularly elegant pillarless coachwork conspire to make this one of the most attractive pre-war sports saloons available, a fact no doubt appreciated by Lady Grace when she took delivery 81 years ago
Posted by jeffharris at 15:00